Chat with us, powered by LiveChat

Why Inverter Generators are Ideal for Camping?

Why Inverter Generators are Ideal for Camping? 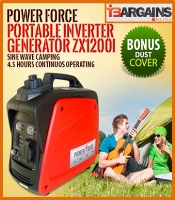 Michael Faraday discovered generator which became a resourceful appliance that transforms mechanical energy into electrical energy. These days, the most common camping generators utilize fuel powered engines to produce this energy. As long as you have the right fuel, you will have electricity and so they are an excellent travel companion to have when travelling in distant places.

To produce very clean AC power, inverter generators make use of a different type of source. The generator's overall size and weight have been brought down considerably by the inverter technology. The advancement in the inverter technology has made it possible for the engine to run at varying speeds dramatically decreasing the noise levels and fuel intake. The working of an Inverter generator is explained below in 3 simple steps.

For recreational purposes, a small 1000-watt portable generator might be all that you need. On the other hand, using a generator to power tools on the job-site, you might use up to 8000 watts. As you would plug appliances directly into a portable generator, you will need to ensure that your model has the number and type of outlets you require. The fuel tank is also a key factor. The larger the fuel tank, the more your generator would run and generate power without the need of refilling.

Some inverters are manufactured particularly to power low-wattage devices such as portable phones or digital music players. More sophisticated inverters are made to handle heavy-duty power tools. In case you are going to purchase an inverter that's powered by its own battery, you need to take into account the number of hours the inverter would supply power prior to a required recharging. When you buy an inverter, you require one that can manage the wattage of the devices you plan to attach to it.

Now, we can look at the advantages of using a generator as the main power supply when you are camping out and your vehicle is immobile.

The Advantages of Using Inverter Generators Superior Power Output: Inverter Generators generate power that is as consistent as the power you get from your power outlets at home.

Portable/Lighter and Smaller in Size: As it is portable/ small and light in weight, it will easily fit to any small space and can be moved quite easily. The mechanical parts to the source are now united with the engine flywheel. This facilitates inverter generators to be smaller and lighter in weight than the conventional models.

Higher Fuel Efficiency: As the engine does not have to continuously run at maximum speed, economy throttle decreases fuel intake by up to 40%. It also aid in reducing exhaust emissions.

When going on a camping trip, you can carry some of the electrical appliances from your home and make your trip more pleasurable. With the facility of a generator, you can easily make your morning coffee on your electric coffee maker as well as allows you to enjoy your preferred television program when camping outdoors. However, don’t forget to thoroughly examine the accessible alternatives prior to buying a camping generator.

Select Afterpay as your payment method

Use your existing debit or credit card

Complete your checkout in seconds

All you need is:

1) A payment card; 2) To be over 18 years of age; 3) Resident of country offering Afterpay